This is the story of our Mesozoic Porter Series.

My kids have always been way into dinosaurs.

We’ve watched all of the shows on Netflix, hours of Dinosaur Train on PBS, and read every kids book we could find on them in our local public library. Okay, maybe not every book. But a lot of them.

So what is it about these creatures that captures the imaginations of our children? Why are they so interested in animals they can no longer see alive in the world around them? If you don’t find yourself often thinking about the world of the dinosaurs—the same world we live in today!—I challenge you to pick up a Mesozoic Series porter, have a seat, and imagine with us.

I think what interests us all is thinking about the fact that somehow the world can exist without us. The world doesn’t need us. For anything. And yet, we still have this intrinsic need or desire to be wanted, to have purpose, to mean something. To belong. Thinking about dinosaurs, which lived so, so long ago, compels us to dwell on our own infinitesimal smallness.

Dinosaurs exist at the crossroads of science and fantasy. Like much of scientific theory, we often base our latest assumptions on the theories that have come before. Theory upon theory, based on a scientific method of discovery. So much about dinosaurs is entirely unknown—because so much about our earth is yet unknown. We are left to fantasy based upon the best available science to us.

Check out this awesome BuzzFeed article about how we imagine and render dinosaurs. The article is based partly on a book called All Yesterdays, by CM Koseman (and co.). At some point, we simply accepted as fact the way dinosaurs have historically been depicted by artists. Today, some are challenging these preconceptions. It’s pretty cool.

Our porter series is named after the era of the great dinosaur. The Mesozoic era, which falls within the Phanerozoic eon, covers all of what we consider to be “the age of dinosaurs”—the Triassic, Jurassic, and Cretaceous time periods. We’re talking like 250-70 MILLION years ago. It’s absolutely mind-boggling.

Geologic time scale (GTS) categorized dates into groups as supereons, eons, eras, periods, epochs, and finally, ages. (Here’s a good wiki page on that.) The beginning of beginnings and so much of the earth’s unknown origins falls in the Pre-Cambrian supereon. It’s a massive amount of time. Like, incomprehensibly huge.

As we were brainstorming names, I found myself wanting to walk the line between catchy names, names that could be grouped together as a series (but also left room for other series’), and names that people could pronounce, but still learn something from.

I thought about using dino names from a specific period, but really, the only period with the good dino names is the Cretaceous. (That’s where all of our favorite dinosaurs live, contrary to pop culture’s insistent use of the word “Jurassic”. I guess we’re kinda stuck with it…)

I thought about using the Ceratopsian phylogenic group, but nobody can pronounce that, and nobody can pronounce all those other dinosaurs within each of the families in that classification anyway. I considered Ornithischia and Sauraschia…. (Yes, I had entered the rabbit hole.) We needed two more beer names.

Tropical. Bananas. Oranges. Our two remaining beers are often associated with warm, tropical climates, so it wasn’t a stretch to connect those flavors to the climate we associate with the Mesozoic era. Taking that one step further, I looked at the geography of that time. Could those dinosaurs have eaten bananas and oranges, too? Were those plants even around?

Pangaea. The supercontinent of the Paleozoic and early Mesozoic eras. During the Mesozoic, this massive land formation split in two: the “northern” Laurasia and the “southern” Gondwana, which would later become today’s South America, Africa, Australia, and Antarctica, Indian subcontinent, and Arabia.

Pieces of Gondwana now today produce the majority of the world’s bananas, so we chose it as the name of our chocolate chip banana bread porter. Pangaea, on the other hand, simply looks and sounds more like “orange”, one of the complimentary flavors of our orange-chocolate porter. Oh, and we haven’t released Gondwana… yet. It needs more time to age.

Take a look at the description we printed on our Mesozoic Porter Series bottles:

MESOZOIC. Our small-batch porters are named after the era of the great dinosaur. These creatures have captivated minds and imaginations for centuries, and we’re still discovering new species and using the latest technologies to uncover the mystery surrounding these fantastical beasts. Imagine drinking one of our geological porters in the day of the dino and let it stir up your own creativity. What fascinates you the most about these animals from an age long-since passed? Join the conversation and read the full story on our website, search #beergenesis.

Come join us on April 28th from 3-7 PM for a special beer release event at Jay and Megan Mkrtschjan’s house in St. Charles!

Look for more announcements about our Miles Series later this week, here and on Social! 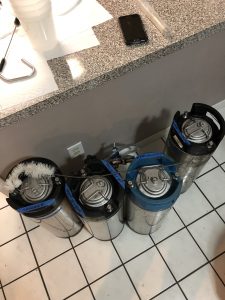 We’re feeling pretty good after brewing our last batch of beers—Saisons! That banana Belgian-y smell mixed with a good dose of hops (more than your average Saison). We’re planning to bottle on Saturday 12/22 and release on Sunday 12/23, first to our mailing list (GET ON IT if you aren’t already!) and then to the rest of the world. Yes, I would say being on the list is worth it. Pictured is a snapshot of our four completely full cornelius soda kegs. That’s over 200 bottles of beer. Over 50 bottles of each variant. More details to come on those. Cheers!