By now many of you have had a chance to enjoy our Mondrian Saison Series beers. Four variations on the same base malt theme. With each new beer release, we plan to do a little write-up like this one, explaining the story behind the series name and each of our new beers. Kinda cool, I think.

To kick off our Beer Genesis posts, I get to write about our most recent batch, brewed all the way back around Christmas. (#beergenesis on Insta. or in a search on our website.)

To begin, one must start at the beginning. At the very earliest stages of planning and designing our Tangram Fox logo, I knew that I wanted to use each distinct shape within the logo to signify a different style of beer. By doing so, we maintain our easily-recognizable logo and incorporate within it an quick way to identify the style of beer one is drinking, buying, or sharing—but only for those in the know (or those who read our labels or follow us on Social). Kinda clever, we thought.

Before brewing our Saisons, I already knew that I wanted to use the color blue to represent them. I also had a vague thought to pair each different colored beer style with a different name theme. 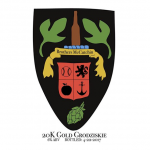 From the genesis of Modal Community itself, back when I was labeling everything tongue-in-cheek as “Brothers McCutchin”, I’ve named every beer around the theme of baseball. (I chose to continue that tradition with our very first Modal Community Double India Pale Ales [DIPA’s].)

The idea was to continue the tradition of baseball, but add on other name themes, including more “refined” artistic themes such as jazz musicians, musical genres, musical modes, or other sports themes such as Chicago sports, the Bulls, American natural landmarks, and more. We’re in process, of course. (See what I did there? We’re MODAL!)

So I was leaning towards associating our Saisons with painters from the beginning—just because of the origin of the word Saison itself. It’s French for “season” and I naturally associate France with “high art”, and painters, and the first one to come to mind is Picasso (even though he’s Spanish [he lived much of his life in France]. And of course, I automatically think of the Old Guitarist painting and that beautiful blue color… (It was all kind of a cyclical thought process.)

So here’s the rest of the story…

Brew Day was all the way back on November 24, 2018. As usual, I invited a whole crew of friends over to participate and help out. For the first time, I scheduled a day-time brew session.

Rabbit trail: It basically turned into a flip-flopped brew day. Instead of cleaning up after the session in the middle of the night, I ended up wash/prepping equipment ahead of the session in the middle of the night—didn’t sleep at all! Oh, and I flooded my kitchen with water—twice! (That’s another story.) My chemist brew friend, Steve, knocked on my door at 5:30 AM to get our session started. I was mopping up water in the basement when he arrived. But I digress…

Around mid-morning, my friend John G. arrived to help out, too. This was his first time brewing with me and his first time ever actually seeing the Modal Community logo. John also happens to be a bit of an art buff and artist himself (He loves woodworking and has a great interest in art history and painting.)

So it turns out that the very first thing John thought of when he saw our Tangram Fox Logo was the work of Piet Mondrian.

“Ever hear of a painter by the name of Mondrian?” he asked. Me: nope. “Check this out!” he says, handing me his phone.

It was a picture of Composition with Red, Blue, and Yellow. Not only did the painting feature bold, black lines and geometric shapes, just like our logo, but those smaller shapes were also colored. The similarities between Mondrian’s minimalistic style and our logo were undeniable. Love it. I was eager to learn more and spent the next several weeks gathering information about the painter and reading what I could.

Piet’s style stemmed from a deep-seeded belief in art’s transcendence—its ability to communicate to the soul—and he felt the best, purist art resembled nothing at all of the natural world. Of course, his works didn’t always portray that; and, of course, his own philosophy evolved over his lifetime. Looking at his early Paris works, he followed in the Cubist tradition of Picasso himself (and others) before finding his own artistic and philosophical voice in later works. Among these early Paris works were Tableau No. 2 and Compositie 8 (Composition 8) (1911-4).

In later works like Broadway Boogie Woogie (1942-3), we see a Mondrian who has indeed abandoned representational painting and found his own place as abstractionist. Bright, dancing colors and textures influenced by the music of the day. (The influence of music on this late work is truly what I love about it!)

Here are a couple of my favorite Mondrian quotes (naturally, I relate to his musical vocabulary):

“I wish to approach truth as closely as is possible, and therefore I abstract everything until I arrive at the fundamental quality of objects.”

“True Boogie-Woogie I conceive as homogeneous in intention with mine in painting: destruction of melody, which is the equivalent of destruction of natural appearance, and construction through the continuous opposition of pure means – dynamic rhythm.”

“The rhythm of relations of color and size makes the absolute appear in the relativity of time and space.”

Every beer label description begins as a lengthy novel which must be distilled down to the most basic essence of beer and tribute. Here’s the full Mondrian Saison Series beer description we couldn’t print:

Dutch painter Piet Mondrian is the essential icon of Modernism. His minimalistic artistic vocabulary, using primary colors and values and geometric shapes, reminds us that beyond the chaos of modern life there is a universal beauty to be found in art which revives the soul.

The constructs of our post-industrial existence are still ill-fitted to meet our deepest needs and we continue to question them, answering the rally cry “make it new.”

Traditionally characterized as a refreshing summer ale brewed by farmers, Saisons represent the utility of the seasons, essential to peasant life. Brewed in winter, aged until summer.

We hope this Season our handcrafted beers revive your soul. As we strive to make the Style new by pushing beyond tradition, let us work together to reinvent how we interpret the world around us. Together we are Crafting Change.

If you want to learn more about Piet Mondrian, a great place to start is Wikipedia. Be sure to check out the References at the bottom of the page. Cheers!